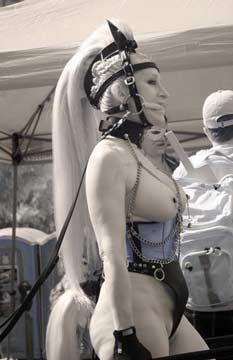 Last Sunday, I went to the Folsom Street Fair to look around and take some photos (T is still down in Oz, so I didn't go as a pony, which turned out to be a surprisingly wonderful experience). At the fair, I re-learned one of the reasons I should be taking my own advice: pony play (and animal role-play in general) is mesmeric. 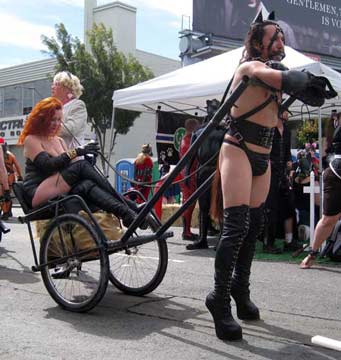 When enthusiastic participants are playing, you can't help but be enchanted. Okay, so maybe it's not MLP magical (a good thing in my opinion), but it's like being in a kinky Disneyworld. There is a sense of wonder; the participants were captivating: a latex pony dancing and posing for the cameras, a puppy eagerly dropping to all fours and playing, and Beauty (subMissAnn) looking regal and, well, beautiful.

I wasn't the only one that felt this way. The human animals were quite popular at the fair. Indeed, they were so popular that many of the animals spent more time stopping and posing for photos than walking. And, it's not like Folsom has little else to photograph.

While I will be the first to admit that the attendees of Folsom are probably more predisposed to like pony play than say, your average Republican, I still believe that pony play is one of those things that, if you see it in person, you get it. I think people can see photos of human ponies online and dismiss the fetish as silly, but seeing the same sight in person...it's much harder to dismiss.

I wish I were more eloquent so I could convey just how amazing it was to watch, but alas, I'm just a crass little ponyboy and not an orator, so all I can do is urge you to actually go to an event and experience the wonder for yourself - and don't make the mistake I did of waiting a decade before you do.