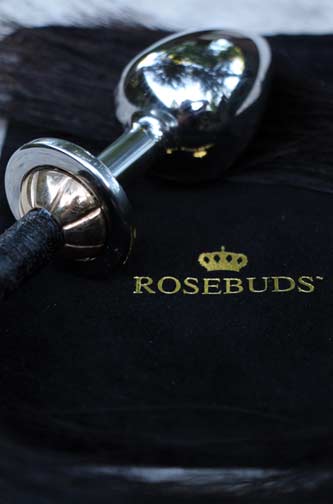 Designed by Julian Snelling, the plug portion of the Rosebuds butt plug tail is solid steel with a bronze base. The tail is real horse hair, and is available in black and grey. The Rosebuds has an elegant look to it (not something you would normally expect in a butt plug), and although I am not big into plugs/anal play, I decided to give it a try.

The plug portion of the Rosebuds tail usually comes in a single size (penetrating length of a little under 2.5 inches, a circumference of over 3.5 inches, and weighing around 8 ounces), but I found out that Fetishzone sells a larger version (called "x-large") as well as the standard ("large") size.

As someone who only seldomly uses a butt plug, I have no idea why I chose the x-large. I just saw it as an option, and I figured...well, to be honest, I don't really know what I figured, but I can't say I regret my choice. Weighing in at over 1 pound, the plug portion has a penetrating length of just over 3 and a quarter inches with a 5 inch girth at its widest point.

These numbers may not sound impressive, but in my hands, the plug feels substantial. It feels even heavier than its 490g weight in my hand. However, once it's inserted, it's surprisingly unobtrusive: although I certainly knew something was there from the way it would occasionally tickle my prostate, I was amazed at how the weight of the solid steel plug seemed to disappear.

The attached tail is real horse hair, and I measured the length of the tail to be 16 inches (plus an additional inch where the hair is wrapped together at the base of the plug). This is a little short for my taste, but it is comparable to other plug tails. The tail portion was clean but was a little "wavy". I deicded to give it a quick wash and condition before use, but this was probably uneccessary.

The horse hair does fall out a bit with each use. Believe it or not, aside from my bio-horses, I don't have much experience with real horse hair products. I only have a horse hair flogger, which gets very little use, but I'm told that some shedding is normal with these products.

I don't know if it was just the physical pressure of the metal against my prostate, or the psychological aspects the large, solid steel plug (and being reminded every time my tail brushed against my legs of exactly how it was attached), but this was the first time that I really shot out of the Pegasus when I came.

The tail stayed in place very well while walking around on either or four legs (though I did not test it at any gait faster than the walk), which seemed impressive given its weight.

I personally love the design of the plug and enjoy the way it feels. I really enjoyed getting on all fours, sticking my ass in the air, and feeling the tail swish against my legs. However, I would really enjoy seeing one of these plugs on a ponygirl who is doing the same.

The Rosebuds tail is a little hard for me to assign a rating to. The tail with the x-large plug, which is what I reviewed here, is quite pricey, but the quality is also very high, and the aesthetics are wonderful. Assuming that the tail will last me for many years (based on my initial impressions of the quality, that is easy to believe), I give the Rosebuds tail plug 4.75 out of 5 stars.

My only complaint is the length of the tail: I would prefer a tail about twice as long, but it is inline with other tail plugs.

The Rosebuds tail with the x-large plug is $219.95 $159.00 (the price of the x-large plug option has decreased $60.95 since I purchased mine, which is incredibly awesome of FetishZone; most shops are continually increasing their prices, but FZ is great about keeping prices the same and even lowering them whenever possible) from Fetishzone (the large plug is $124.95). With shipping, I paid $241.30 I won't lie: this is an expensive toy. However, it is tastefully designed, well made, and fun to use (or rather have used on you).