Review of the Pony Point Trainers from Sinvention 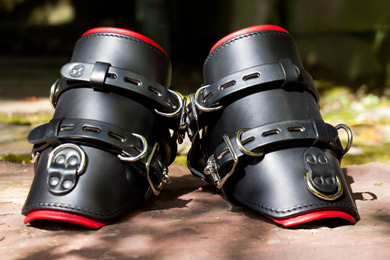 Regardless of the terminology, the trainers are designed to keep you on your toes, just like a pair of pony boots. Although these certainly don't have to be used exclusively for pony play (they would likely be useful to anyone who likes severe heels as well), they are perfect for training your pony to stay on his toes. Plus they come from Sinvention, who also make lots of other beautiful pony gear.

Ordering and Shipping
Before I get to the meat of the review, I wanted to briefly touch on the ordering process. See, while I have admired their products and signature style for years, this was actually my first ever order from Sinvention. As it happened, they redid their website right after I placed my order. This could easily have turned into a nightmare ordering experience, but I shot them an email checking on my order, and someone got back to me within a couple minutes assuring me that they would send me the tracking number as soon as my order shipped (which they did).

What's more, in chatting with the representative, I found out they were making my trainers from scratch, which, while awesome in and of itself, also meant that I had a chance to customize my trainers. I asked it it was possible to add some red to the trainers, and the Sinvention rep said that sounded great and they would be more than happy to accomodate me by using red leather for the soft interior lining, which shows off a nice red highlight when they're being worn.

The trainers were shipped expedited post for free (the trainers were $195 CAD, so I purchased a couple rolls of vetwrap ($4.50 CAD each) to push the order over the $200 CAD minimum for free shipping), and they arrived safely in a discreet box with the customs declaration merely stating they were leather goods:

My first thought after opening the box, unwrapping the beautiful tissue paper, and removing the lovingly packaged pony point trainers, was: "Wow!"

Aside from the intoxicating smell of new leather as I lifted the trainers from the box, I was surprised at how substantial the trainers were: both in dimensions and weight.

The trainers looked and felt well made. I'm not really sure how to explain it, but holding them in my hand, turning them around, feeling the leather and the stitching, I could tell that someone spent time carefully crafting this, someone who knew what they were doing.

It wasn't just the quality and workmanship, but there was an aesthetic element as well. In my mind, you can have a strong, well made (e.g. technically well made with proper stitching, etc.) item that will stand up to use and abuse, however it might still lack visual or tactile appeal. The trainers had that rare combination of aesthetics and functionality that made them a delight to wear (albeit accompanied by a slight feeling of guilt that you're defiling a piece of art while you do so).

Construction
Elegantly designed, the trainers are constructed of a thick, stiff piece of 3/8" leather on the outside to retain its form and resist a pony's attempt at coming down off his toes, yet the inside is lined with a soft, supple leather to cushion the foot and facilitate long term wear.

The pony point trainers function by using a stiff piece of leather that physically prevents the wearer from lowering his heels. Additionally, if the wearer attempts to lower his heels, the stiff leather will painfully dig into the upper part of the foot and the lower part of the leg.

To help keep the trainers aligned on the top of the foot, there is an attached heel cup and three thick leather straps - all lockable of course (ensuring long term wear regardless of the pony's thoughts on the matter).

One strap encircles the lower leg, just above the ankle (thus ensuring the trainer can't be pulled down and off the leg), and attaches via a post, which is lockable:

The other two straps are dedicated to holding the heel cup in place. Both are lockable via a locking buckle:

The heel cup, like the rest of the trainer, is leather (for some reason, I always thought the heel cup was plastic from the photos I've seen online), which was a pleasant surprise. Not only did it add to the sensation of having my feet wrapped in leather, but it made for a more snug and comfortable fit than any piece of molded plastic ever could.

Sinvention states that the heel cup has been redesigned for better comfort, but I am not familiar with the older version so I can't comment on that. However, the current heel cup is quite comfortable.

Trying Them On
After admiring them from afar, I finally found a few minutes to myself to try them on. I sat down and commenced fiddling around with the straps. I discovered that, for me, it was easiest to put them on by wrapping the front portion around the foot and first attaching the top strap as tight as possible just above the ankle.

After repeating that process on the other foot, I basked in the feeling of the soft interior leather surrounding my feet. I'm not sure how best to explain the feeling...if you've ever worn nice thick, padded suspension cuffs, the ones that surround your hand and lower arm (e.g. like these from Mr. S Leather, which, incidentally I have in red leather), you'll know the feeling I'm talking about.

I had worked myself up a fair bit, but I was ready to answer the biggest question on my mind: are the pony point trainers actually effective? Do they live up to their name?

A quick push off the couch immediately answered that question in the affirmative as I stumbled about for a good few seconds trying to find my balance. I very nearly fell over twice and had the painful pleasure of the thick outer leather pressing onto the top of my foot.

My initial assessment: the pony point trainers are not just comfortable, but positively luxurious as long as you stay on your toes. If you don't, they can become a nice torture device.

If you find yourself snugly strapped into a pair of these, and you make the mistake of trying to put your heel anywhere near the ground, the thick outer leather will bite into your leg and feet. And this hurts...seriously hurts. I don't know if it's biting into pressure points or if there's just no cushioning flesh in those particular areas, but the pain was intense.

Oh, and if the searing pain isn't enough to get you back up on your tippy toes, then you'll probably end up losing your balance because that thick leather is not going to give. There's no way you're going to bring you foot back up to anything close to a 90 degree angle with your calf. Attempting to lower your heel is fruitless because it merely tranfers your weight into painful pressure on your foot and lower leg.

But, once you stop fighting the trainers and stay well on your toes (or cheat and sit back down so your toes don't have to bear your weight), they become your friend again, encasing your feet with the gentle caress of the soft lining leather.

Looking at the photo above (right pane especially), when forced to stand on your toes in the trainers, the flexion of the lower leg makes it look similar to the lower leg of a horse, which is kinda cool as well.

The trainers fit me well, and I was not on the last hole on any of the straps. When comfortably snugged up on all the straps, I was at about the halfway point on the ankle strap (the third or fourth of six holes), but near the end on both the heel cup straps (with one hole to spare in most cases). For reference, I generally wear a U.S. men's size 10 shoe (though my legs are a little more slender than average). Although they didn't ask me anything size wise and everything worked out, you might consider checking with them to make sure they don't need measurements if you decide to order a pair.

The strap that goes around the base of the foot needs to be fairly tight, even with the heel cup, to prevent the pony from removing the device. However, the trainers are well padded and you can cinch down all the straps pretty tight and still be comfortable.

I was quite surprised at how effective the trainers were at keeping me on my toes and nearly equally so with how comfortable they were when I wasn't fighting them. In fact, when I was sitting down with no weight on my feet, I couldn't feel anything except the pleasant, light pressure of leather. To top it all off, the trainers look absolutely amazing.

Conclusions
At just shy of $200, the pony point trainers are not inexpensive in absolute terms, but they are reasonably priced for a high quality (both from a durability and aesthetic perspective) leather item. For comparison, if you purchased a similar quality - again, considering the aesthetics of the finished product as well as its quality of manufacture - pair of lockable, padded leather ankle cuffs, you would likely pay somewhere around the $100 - $150 mark. Given these are more specialized than ankle cuffs, I don't feel they are priced unreasonably.

Moreover, these look and feel like a $200+ leather item. The photos don't really do them anywhere near the justice they deserve. Obviously the trainers are niche items, but if the concept of a pony boot trainer is something you like, I honestly cannot imagine that you would be disappointed with these unless they physically didn't fit you.

Finally, these aren't, at least to my mind, designed to take the place of pony boots. Rather, I see these trainers as just that, trainers for hoof boots. They can help get your pony used to the feeling of being on his toes without all the overhead of having to put on his boots, which really can be a chore if you have knee (or higher) high pony boots to lace up. Additionally, the trainers are more convenient for overnight wear or saving your hardwood floors from abusive metal horseshoes.

Plus, they're a really cool bondage item and look hot :)

The pony point trainers are a Sinvention exclusive, and they can be purchased for $195 CAD directly from Sinvention.