For example in the top pane of the image at the right are three snaffles (the middle one is a standard rubber bit gag, which is a straight mouth rubber snaffle in the bio-horse world). In the bottom pane of the photo (with the red "X" through it) is a gag bit (a gag bit uses leverage though it is not the same as a curb bit): this is not a snaffle. A snaffle merely describes the action of the bit, not the mouthpiece.

Snaffle bits have a multitude of mouthpieces (as can be seen in the photo at the top right), which can make them very severe to the human pony. For example, a simple rubber bit gag with the addition of a juba port can stimulate the gag reflex when the reins are pulled.

Just because they act by direct pressure, doesn't necessarily mean that snaffles are mild. However, a curb bit or a gag bit with an identical mouthpiece will likely be more severe because it puts additional pressure on the chin, poll (top of the head if the human pony has a bridle capable of accomodating a leverage bit) and, depending on the mouthpiece, the roof of the mouth.

An easy way to tell the difference between a snaffle bit and a curb (or even a gag) bit is to look at the number of rings the bit has. A snaffle bit will have only one ring on each side of the bit (the reins attach to same ring that the bridle attaches to). A curb bit or a gag bit will typically have at least two rings on each side of the bit: one ring (the upper ring, usually closest to the mouthpiece) will attach to the pony's bridle, while the second ring (the bottom ring, which, on a curb bit, will be futher from the mouthpiece; on a gag bit it may be of similar distance, but on a gag bit the mouthpiece will not be fixed to the bit rings, but will be able to slide along them) will be where the reins attach.

Now from experience, I have found that jointed mouthpieces are quite ineffective on the human pony. However, they are aesthetically pleasing: I absolutely love the look of a jointed bit on a ponygirl. And just in case you care, here are a bunch more bits that are technically all snaffles: 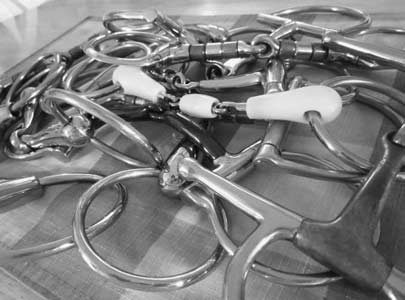