This item of tack is mostly seen in race horses, and it serves to keep the horse's tongue held down below the bit. A tongue tie is merely a length of cloth or elastic material (e.g. rubber bands are sometimes used) that ties down a horse’s tongue. An example of a rubber tongue tie is shown in the image below.

In ponyplay, tongue ties are not too common. Instead, other solutions such as tongue ports or special bits are used. In my experience, tongue-ties are not effective in humans, whereas bit/tongue ports are.

I've experiemnted with tongue ties on several occasions with little success. I've tried commercially available bio-horse tongue ties, as well as homemade versions and found that they will slip off the pony's tongue quite easily. The exception to this is for those ponies (like me) who have tongue piercings. A tongue tie can be attached directly to the (in my case) barbell or simply tied around the tongue behind the piercing such that the piercing prevents the tie from slipping off the tongue.

Tongue ties for horses are fairly inexpensive (~ $5-10 USD per tie) and sold by most major tack shops, but rubber bands, or pieces of cloth or nylon are often used. The image below shows a bio-horse with a piece of black cloth used as a tongue tie. You can see from the image that the cloth is simply knotted below the chin to hold it in place. 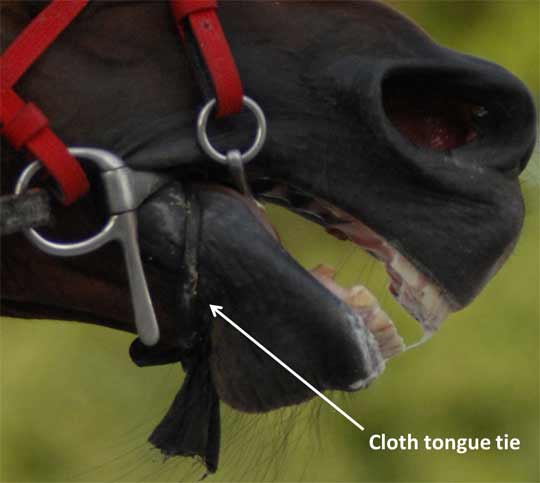 Unfortunately, while this sounds great in theory, the anatomical differences between horse and human make this device not so easily translatable. On the other hand, if you have a rubber band, or piece of cloth handy, it's easy, cheap, and fun to try. Although it only takes a really short amount of time and tongue maneuvering to get your tongue free, until you do the feeling of tongue restriction is awesome. Of course, if you're tongue is pierced getting your tongue free won't be nearly so easy.