Teaching your pony to pick up his feet is important to maintaining good form and balance. Both ground poles and cavaletti are good tools to use to assist in training your pony to do this. Cavaletti are not only for jumping ponies. They are used to help ponies have a more elastic, longer trot, and longeing or driving your pony over cavaletti is great as a warm up exercise.

A cavaletti is a pole raised off the ground usually by placing it on a small "x" made of wood or plastic. The image below shows a cavaletti. As you can see the pole is not raised very high. When working your pony with cavaletti, you will not be asking him to jump them. Rather you will be asking him to lift his feet up at the gait (usually the trot). If working at the trot, the goal will be for him to use a high enough trot step that that he can simply trot over them.

While many people use the terms "ground poles" and "cavaletti" interchangeably, I consider them separate. When I talk about cavaletti, I am specifically referring to poles raised off the ground, and when I talk about ground poles, I am specifically referring to poles lying on the ground (not raised). Anyway, since cavaletti are raised off the ground, it is easiest to use them when longeing your pony. Thus, for the purpose of this article I will assume you will be working with your pony on a longe line.

I'm assuming that you will be working on a circle (if you are not, you should arrange your cavaletti in a straight line). Since your will be longeing the pony, you will remain at the center of the circle. Start by setting up 2 or 4 cavaletti at a low height on the circle. The figure below illustrates a couple ways you can setup your cavaletti on a circle. To begin though, let's make them evenly spaced over the circle just like the image on the right. 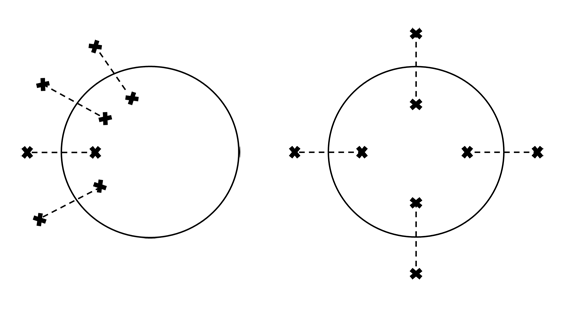 Now start longeing your pony on the circle at a walk. Have him walk over the cavaletti a couple of times to make sure he is lifting his feet up and nit hitting the poles. Now raise the cavaletti one at a time and repeat this exercise until the pony is comfortable walking over them at any height you will be using.

After practicing at the walk, lower the cavaletti a little and start your pony off around the circle at a trot. Watch your pony as he trots over each one. Make sure that he is picking his feet up over each one. Also make sure he is able to maintaining a constant speed. The pony should not be slowing or speeding up when going over the cavaletti.

Longeing your pony over cavaletti is a great exercise, and you should consider doing this on a regular basis. It is great as part of a warm up and to keep your pony lifting his feet up. While cavaletti are well suited for pony's that jump, they are useful in most disciplines because they also make the pony more sure footed in addition to encouraging him maintain a nice elastic trot.

Once your pony has the hang of trotting over them, you can vary the height of individual cavaletti to keep changing things up. Doing so will prevent your pony from getting too bored with the exercise. Also, if you had the cavaletti on a circle, try using them on a straight line and vice versa.