Hot Walkers and Treadmills in Ponyplay 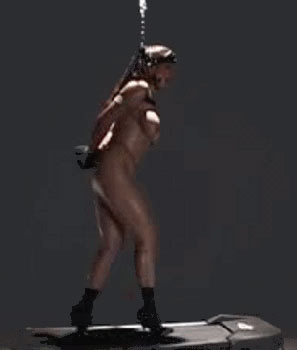 There are three major ways to accomplish this (though in this article I will only discuss the first two: I talk about e-stim devices in ponyplay separately): 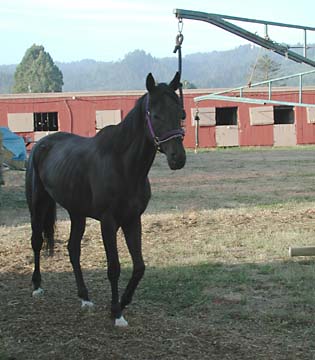 Hot walkers are machines that turn slowly and walk bio-horses around in a circle at a set speed. They consist of a central portion where the motor is located along with poles that extended outward, like the spokes on a wheel. Bio-horses are tied at the end of the long poles/spokes. Hot walkers are designed to accommodate anywhere from 2-8 horses though most are designed for either 2 or 4 horses.

The main advantage of a hot walker is that it requires no modification for use with ponies. Once attached (and with the pony's arms restrained or in hoof mitts) a pony cannot avoid walking at the pace set by the walker. While it is possible to lock the pony to the hot walker (meaning even if the pony is not otherwise restrained, the pony cannot detach himself from the machine and will be compelled to walk at the speed set by the walker), this is not recommended for obvious safety reasons.

A couple other things that I personally like about hot walkers:

The disadvantages of the hot walker are: significantly higher cost and space requirements in addition to significantly reduced maximum speed compared to treadmills. A hot walker is not practical unless one lives somewhere with enough land to put it up. There may be zoning requirements that have to be met as well.

Overall, I'd say a hot walker is a great device for ponyplay if you can find the space for it. If you are interested in buying one, Centaur Horse Hot Walkers is one option for those of you on the west coast of the U.S. Plan on spending around $4000 USD plus installation for a new 2 horse model. 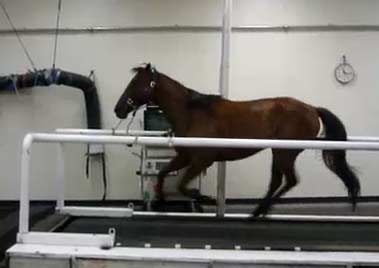 Treadmills designed for human exercise are probably the cheapest and most convenient to setup and use. However, unlike a bio-horse hot walker, a treadmill designed for human exercise must be modified to prevent the exercising pony from simply stepping off the belt. I have seen several ingenuous ways in which this was accomplished. However, the most common solution to this problem is removal of the treadmill's side rails (if any) followed by creating an attachment point to the ceiling above the treadmill to which the pony's harness may be tied.

A treadmill is probably the most realistic option for most ponies and trainers due the cost and size advantages over a hot walker. Just remember to choose the treadmill carefully (some are available without the side rails) to avoid having to do extra work later on. Also plan on being a little creative when designing an attachment system for your pony. And if you're concerned about realism, don't be: bio-horses are often run on treadmills (albeit larger ones) for speed testing and rehabilitation (see photo above right). 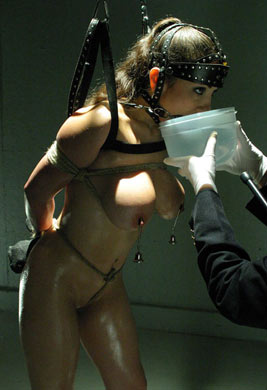 And remember to give your pony plenty of water after a hot walker or treadmill exercise session - running on a treadmill is thirsty work.