Implantation of radiofrequency identification (RFID) microchips under the skin of animals (horses, dogs, and cats especially) is becoming more common as way in which to identify the animal. This can easily be done in humans as a part of ponyplay. This is one of those things that will probably only apeal to a very select few ponies or puppies, but it's worth including for completeness.

Note: At this time I strongly recommend against implantation of these devices since preliminary rodent studies have indicated an increased incidence of cancer in animals implanted with certain types of these devices. I would suggest waiting for results of more comprehensive studies prior to using these devices on you or your pony.

Interesting fact: the TV show Mythbusters had an episode where they tested the effects of having of these implants, and one of the cast members had one of these pet RFID chips implanted under his skin. I believe he received a local anaesthetic prior to implantation since the needle used for implantation is not small, but in most cases (in animals) a local is not used.

The image below shows an implantation syringe along with the microchip to be implanted. 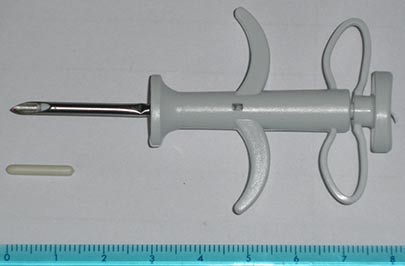