How to Attach a Juba Tongue Port

A rubber bit port (also called a juba tongue port) is a $2 piece of molded rubber that attaches to your pony's bit. Its purpose is to hold the pony's tongue down and prevent him getting his tongue over the bit. Below is step by step guide with photos illustrating how to attach it to a simple rubber bit (I use a straight mouth rubber snaffle in this tutorial).

Before we start here is the overall idea of what we are going to do: 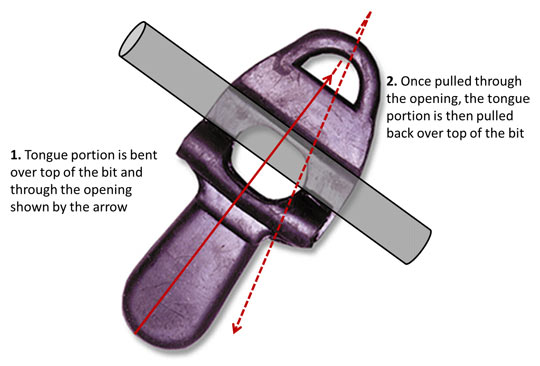 Now that you have a general idea of how the juba port will attach to the bit, let's get started:

Dover Saddlery sells rubber bit ports. You will probably pay more for shipping than the juba tongue port itself, so you may be better off buying from a local tack shop.

You should hopefully now be able to attach a juba tongue port to your pony's bit. The attachment procedure is most difficult for thicker bits (such as the rubber straight mouth snaffle used in this example). If you have a bit with a thinner mouthpiece (e.g. some driving bits), you should have no difficulties.