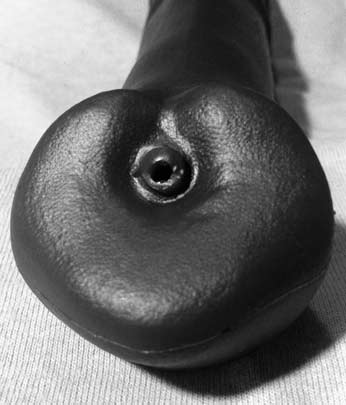 For several weeks I came perilously close to wearing out my browser's refresh button as I compulsively checked Fetishzone's website for the Pegasus equine sheath to be back in stock. Then, last week, I checked again and to my pleasant surprise, it was in stock and available to order.

Note: The Pegasus equine sheath is a silicone toy! I understand that it might not appeal to everyone, but it is simply a toy, and while I do enjoy using the Pegasus, this should not be taken to imply that I condone sexual contact with non-human animals.

Ordering and Shipping
Before we get to the fun stuff, I'll give you a little overview of my experience ordering from Fetishzone. This was my first time ordering from them, and I have to say I was pleasantly surprised with the experience. Although I went to their site to order the Pegasus equine sheath, I decided to order a couple other items at the same time.

I purchased the Pegasus equine sheath for $79.69 (I bought it on 2012-08-02); I also purchased a bottle of the water based lube they recommend for use with the sheath (an additional $12.50). If you purchase only these two items, the shipping should be $10.95 (mine was slightly more because I ended up ordering some other stuff at the same time). So, expect to spend around $100 USD for the sheath and lube. 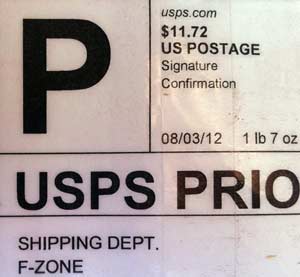 When checking out I was given the option to create an account with them or pay through Paypal. I elected to pay via Paypal because their online account creation system wanted my full date of birth - while I'm sure this is innocent, I tend to shy away from giving out that sort of personal information along with my credit card details if at all possible.

Regardless, the order process went smoothly, and after placing my order on Thursday night, I received an email early the next morning (~6 hours later) saying that my order has shipped by priority mail with scheduled delivery on Monday - awesome!

Wishing I had ordered one day sooner to have it for the weekend, I nevertheless made it through the weekend and through work on Monday. Arriving back home I found my order had arrived in a standard, non-descript priority mail box with a return label of "F-zone" (FYI: Fetishzone requires a signature for delivery if your order is $50 or more). My postman probably suspects I order fetish gear, but I still like that it was shipped discretely.

Opening the box, I discovered that all the items were individually sealed in their own plastic bags and then all of those bags were placed and sealed in one big bag. Looking at the shipping label I noticed that the postage says $11.72, which is impressive because my order was split into three shipments (a couple of the other items I ordered were backordered).

Considering I only paid $15.95 for shipping, I can say that they certainly did not overcharge for shipping. 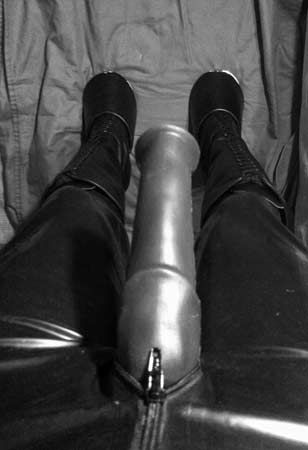 Pulling it out of the plastic packaging, I notice that it has a soft, jelly-like feel. It is quite elastic, and with a couple squirts of the water based lube (I purchased a bottle of lube, but the sheath itself comes with a small sample package of lube) on my cock and another couple inside the sheath, it slips on smoothly.

With the ball strap in place, I take a minute to look down and admire it. I could feel the added weight of the sheath and a gentle pressure on my balls from the strap, but it was a good feeling, not uncomfortable at all.

Looking down from above, the most obvious feature was the medial ring, which is closer to the base of the toy. From this angle, I could not really see the head except for the characteristic tip. Still, even from above, it bears more than a passing resemblance to a horse cock.

Glancing at a mirror however, sent a pleasant rush of arousal through me and caused an involuntary jerk of the pubococcygeus muscle. Seeing the Pegasus jump and mushroom slap the air with its big head in response was quite a thrill.

Playing with My Horse Cock
It looks good (very good), but how does it feel? 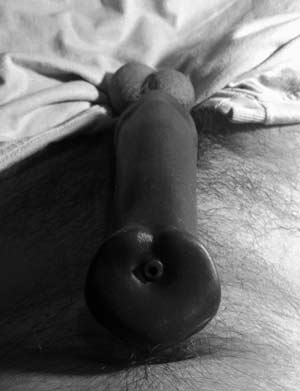 After passing its first test, I was eager to see how it performed during intercourse. With no other ponygirls on hand, my trainer generously took on the role of ponygirl for this session. At first I was thinking a wild horse breeding scene might be appropriate, but then I thought, nah...I want her tied down for this ;)

With my ponygirl tied down on all fours and ready for breeding, I add couple squirts of lube to the outside of the sheath before mounting her. Taking her reins in one hand, I use my other hand to lift up her (butt plug) tail and guide the head of the Pegasus inside her. Given the flared shape of the head, I purposely took my time popping it in (though she did tell me later that I didn't have to be that gentle).

Pumping away from behind her, I was appreciative of the extra length afforded by the Pegasus. It's amazing how that little bit of extra length goes such a long away in that position. The friction was marginally less intense during intercourse than solo use, but the psychological impact was ten fold greater. Watching the Pegasus go in and out of her, right underneath her tail, was indescribably hot.

There was an insulating effect due to the material, but the subtle ribbing on the interior helped communicate stimulation, and I had no trouble finishing. I have not tried using it in other positions as yet because my use of the Pegasus is confined to pony play scenes, where I like to keep my breeding scenes somewhat realistic. However, if I do try other positions, I will post my results.

My Trainer Gives It A Spin 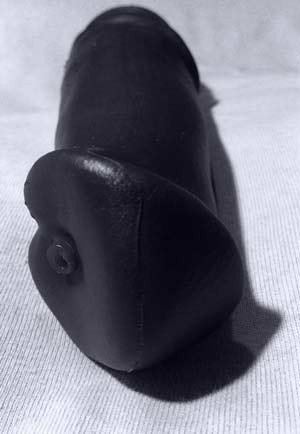 After seeing all the fun I had using the Pegasus equine sheath on her, my trainer wanted to try it herself. Her first thought was to use it as a strap-on, but I (foolishly) pointed out that it might be easier to put it on a strap-on (after all it is a sheath and designed to be worn over a cock - real or not).

My trainer absolutely loved this idea. So after a few minutes messing around with the sheath's ball strap, she was able to get everything situated. Now, the Pegasus is not any 24 inch monster, but I have to say it was a little scary to be tied down on all fours while my trainer came at me with the sheath encased strap on.

Being down on all fours, with the Pegasus equine sheath slightly above eye level, made it seem so big. And looking up at the head of the toy...the shape and size of the cock head, the size and position of the urethra...it looked very realistic. Craning my neck to look past the tip (which was really hard to do with the head of the toy dangling right above my eyes) and seeing the medial ring sitting behind more than 7 already thick inches did not ease my anxiety. Needless to say, the psychological impact was huge.

She had some fun building up the anticipation (to be fair I did the same to her): stroking it in front of my face and such. During use, I could really feel both the flared head of the Pegasus and the added girth. When she got up to the medial ring, it was not as noticeable as I thought it would (much less so than the head itself).

After Care
A good washing is a must with the Pegasus (as it is with all insertables); fortunately it is easy to clean in warm water, and the water based lube comes off very easily. However, even when clean it picks up hair and fuzz due to the consistency of the silicone so I would recommend washing both before and after use (especially if photography is involved). Moreover, you should store it in a nice clean space away from dust.

Visually, the Pegasus equine sheath is superb. I found it incredibly hot to wear, and it took a lot of effort to pry myself away from a mirror. Currently, the Pegasus only comes in one color: a uniform onyx black. I personally like this for two reasons:

The head of the Pegasus equine sheath is very realistic: the shape of the head of the toy, and the positioning, shape, and size of the urethra are impressively reproduced.

The psychological impact of the Pegasus is its biggest selling point. While there are plenty of horse cock shaped dildoes, the Pegasus is the only one that can be worn over your own cock. It gives you both the psychological impact of having your own horse cock and the ability get physical pleasure when using it on your partner. If you like the idea of having your own horse cock, you'll likely love this toy.

The downsides of the Pegasus for me were fairly minor:

That said, I think the Pegasus equine sheath is an awesome, unique toy, and my overall rating is 4.5 out of 5 stars.

The current price (as of 2015-01-08) of the Pegasus sheath is $79.69, which is what I payed for mine (it's pretty cool that they haven't raised the price of this toy since they started selling it nearly 4 years ago). As far as I know the Pegasus equine sheath is exclusive to Fetishzone. They also sell the Cerberus K9 Sheath if you like the idea of the Pegasus but prefer puppy play. 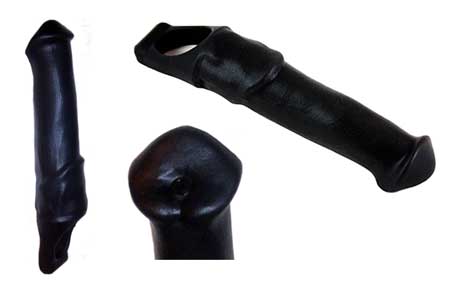