In ponyplay jumping is not performed with a rider on the pony. It should be clear that this would be dangerous for both pony and rider. Thus, a riding pony should not be jumping or attempting to jump with a rider on board. So what does jumping entail in ponyplay? Well, one way is allowing the pony to free jump. This means the pony will be let loose (in an arena) and will then jump the course by himself based on previous training, voice commands, or a combination of the two. Alternatively, a pony can navigate a jump course on a lounge line, driving reins, or, if the trainer does not mind staying close to the pony, standard reins. In all of these cases, the trainer will have to move with the pony.

Here, I will focus on jumping your pony on the lounge line since I am most familiar with this method. However, there are advantages to allowing a pony to jump by himself, and many ponies prefer this method.

Let's start by setting out some ground poles in a straight line with a small jump at the end. (Note: You don't have to use ground poles, but do try and use something of comparable dimensions). For the jump we will use two poles to form an "X" or cross rail. If you have them, use jump standards, but a couple concrete blocks will work just as well. The setup should be of the form shown in the illustration below: 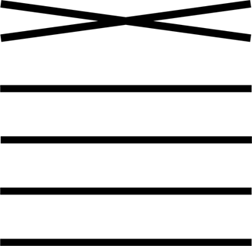 If your pony has experience with cavaletti, you will notice the similarity here. Indeed, the jump at the end of the line will be similar in height (maybe even shorter) to cavaletti. However, unlike cavaletti we do not wish our pony to simply use high strides to trot or canter over the jump. One way to prevent this is to use a jump high enough to force the pony to jump it. However, it is not desirable to do this when the pony is first learning to jump. Moreover, we wish to develop a signal to indicate to the pony when we wish him to jump otherwise he may become confused when a jump's height is low enough for him to trot over. Since we will not be riding our pony, and it may not be possible to use a whip on him to emulate a leg aid due to distance considerations, we will rely on a verbal command. The most obvious command would be "jump" so this is what we will use.

Note: a human pony can jump in two main ways: first he bring both feet together just before the jump and "high jump" over the pole, and second, he can do a running jump over the pole. Either way is acceptable of course, however some jumping shows in the ponyplay world may have a preferred method of jumping. This is especially true of "hunter" type ponyplay shows (which is not surprising for anyone familiar with bio-equine hunters). If you plan on showing your pony in hunter or jumpers classes, make sure to find out if they require a certain jumping style.

Now that our jump is ready, we will show it to our pony. Lead your pony over the first ground pole making sure that he faces it straight on. Using the reins, lead your pony over all of the poles making sure that he is lifting his feet up. When you reach the jump tell your pony "jump" as you lead him over it. It may prove useful to jump over it yourself (leading your pony behind you, but be careful you do not jerk on the reins as you jump over) so your pony can see what is expected of him.

Do not worry if your pony does not get it the first time. Patiently repeat the above: lead your pony over all the ground poles. While still leading your pony, jump the cross rail yourself. Your pony should be right behind you, or right at your side, so make sure to say "jump" when the two of you are in position to start the jump. Continue doing this until your pony will jump the cross rail. Then try the same procedure without going over the jump yourself. Try leading your pony up to the jump at the trot. Make sure you tell him "jump" when you want him to start his jump. The pony should now understand the command "jump."

It is time to move back to the lounge line. Hook your pony up to a lounge line and send him out at the walk. Let your pony warm up a little on the line, then ask for a trot. Once the pony is at a nice working trot, guide him over to the ground poles with the jump at the end. You will have to walk towards the first pole since the pony will be circling around you. Keep him trotting over the ground poles, and tell him to "jump" when he reaches the jump. Repeat this a few times to make sure he gets this.

The last step to confirm your pony really understands what you are asking him is to arrange a circle with four poles. Make two of them ground poles, and make the other two small jumps (the size of cavaletti). Your circle should look something like the image below (dashed lines indicate poles, and a dashed line with "x" on either end indicates a raised pole): 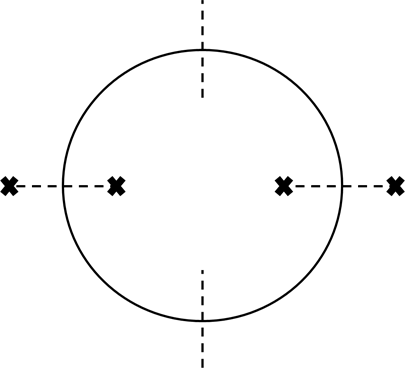 What you are going to do here is have the pony jump one of the raised poles (say the left one) and treat the other as a cavaletti (the right one), trotting (or cantering) over it. You will do this by issuing the jump command right before one of the raised poles just as you would a jump, but you will remain silent on your pony's approach to the second raised pole. The ground poles in between will allow your pony time to think and await your command instead of automatically jumping.

Again, if your pony does not get this right away it is not a big deal. If this happens, keep the setup above, but do not allow your pony to jump either of the raised poles. When your pony understands not to jump, go back to the line of ground poles with a jump at the end and reintroduce the "jump" command as discussed above. Use the straight line setup and alternate between jumping and trotting over the raised pole at the end. Then you can go back and try the circle again. Do not despair, your pony will figure it out.