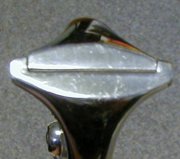 This is an extension on my article on mock castration in ponyplay. Here I will discuss the specific procedure for gelding a ponyboy using Burdizzo castration forceps. As I mentioned in my main article on castration play, this is play, not a tutorial on how to perform actual medical or veterinary procedures.

The forceps work by crushing the spermatic cords. Using these forceps, the gelding procedure is somewhat short; on the order of a couple minutes (of course you can prolong the procedure if you like). Once the cords have been crushed, the testicles will gradually shrink away before finally getting absorbed by the body. In certain cases, one crushing will not be sufficient and the testicles may not be completely absorbed. Should this happen, a second crushing may be required (here's a built in reason for another ponyplay gelding session).

Before gelding your ponyboy make sure he is well restrained in a clean area of your barn. You will probably want to use a spreader bar to keep him from trying to close his legs. A ponyboy will not want to be gelded, and the pain of the procedure will also cause him to instinctively close his legs. 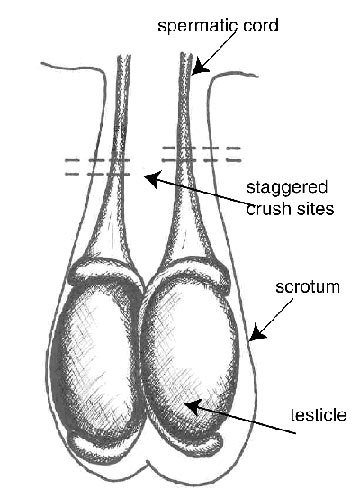 With the cord positioning correctly between the jaws, close the forceps and hold them closed for ten to fifteen seconds before releasing. To decrease the probabilities of the cord healing later on (which will result in a failed castration) move the forceps lower on the cord and crush a second time.

Repeat this procedure for the second spermatic cord.

This procedure really is a great way to mess with your ponyboy and scare the s**t out of him. When he's tied down with his legs forced apart and the castration forceps come out, you'll definitely have his full attention. Even knowing it's castration play, your pony will completely freak out when the cold metal of those castration forceps starts pressing against his scrotum.