A Brief History of Pony Play

As I wrote up the ponyplay faq I had to gather information from various sources, but as I did so, I noticed:

For the purpose of clarity regarding ponyplay history (i.e. on this page only), I will use the term ponyplay broadly to include non-consensual "ponyplay" since there are quite a few references to non-consensual ponyplay throughout history. This usually involves slaves, prisoners, or oppressed peoples being forced into equine roles.

I will consider ponyplay to be any activity or form of punishment in which the intent is not only to de-humanize a person, but specifically to transform a person into an equid. Thus, in and of itself, I will not include being sold or branded like livestock to be ponyplay. However, instances in which people were put in bridle, saddle, or made to act and sound like a horse would be included.

Gagging is an interesting grey area because it was used as a form of punishment, and most gags used were either actual horse bits or fashioned after horse bits. Moreover, gagging was also considered by many to derive its primary effectiveness through humiliation of the wearer via degradaion to animal status since beasts of burden wore bits and could not speak.

However, if we look a little more closely at the practice of gagging, it actually sheds some light on the meaning of phrases we see throughout the older literature such as individuals "bridled like a horse" or people "bridled with bits in their mouths". Indeed, as we discover such phrases probably derive more from the form of the gag used rather than the intention that the gagged person will be transformed into a horse.

While gagging has long been used as a form of punishment, both for the humiliation and physical discomfort involved, it was often seen as a very inhumane form of punishment. Indeed, the punishment of gagging was seen to be significantly more inhumane than flogging. Gagging a person was considered "an unmanly and barbarous cruelty, to be exercised upon beasts, not men.." and doing so will "make him a beast..."[1]. Most gags were similar to horse bits and could be made of wood (i.e. sticks) or metal (e.g. scold's bridle), but a person was sometimes gagged "...by forcing a ball into the mouth..."[2].

Perhaps the prevalent use of horse bits (or horse bit like items) as gags is part of the reason we hear about individuals "bridled like a horse". In those cases it seems the text is likely referring to the act of gagging as the punishment versus specifically making the individual into a horse or otherwise treating him as such. Taking away a person's coherent speech (or at least impairing it) was seen as degrading the person to an animal (since animals don't talk), but I would still count this as separate from making someone wear a horse's bit or bridle with the intent of using him as a horse.

Now that we have a working definition of ponyplay we can look at some of the history. By a large majority, all accounts of ponyplay up until the last century or so has involved non-consensual ponyplay. The few exceptions seen to this are usually fictional accounts meant as fables such as the story of Aristotle and Phyllis. So, what would be the point in wasting time and resources to turn slaves into a team of human ponies?

Well the obvious answer would be for sexual reasons on the part of the slave owner. While this aspect is not discussed overtly very often, I do believe it played a role in more than just a few cases. I believe this because the effort and expense (e.g. specially fashioning harnesses, bridles, etc. for humans) that went into making the slave into a horse exceeded what would have been necessary to use the slave for manual labor.

In some of these non-consensual instances of ponyplay one could argue that forcing a human to become more animal-like served as an example to others of the power of the controlling party (e.g. rulers of former British colonies in India after an uprising used local royalty as horses to pull their carriages) and to demoralize the slaves or conquered people. 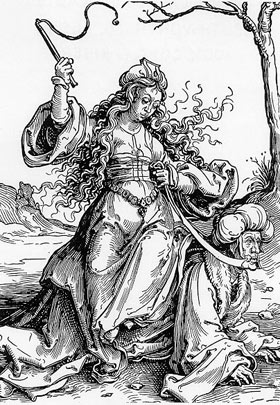 When I first became involved with ponyplay years ago, I encountered a few web references to Aristotle enjoying this fetish. However, until recently I never really tried to hunt down the origins of this particular piece of ponyplay history.

The first reference I stumbled upon was from 1930 and talks about the story of Aristotle and Phyllis. Phyllis is supposed to have seduced Aristotle, and demanded that he prove his love to her by allowing her ride on his back. Aristotle consented, and "placing a saddle on Aristotle's back, a bit in his mouth, etc., she [Phyllis] rode upon him, he walking upon all fours"[3].

Unfortunately it seems the historical evidence is against the truth of this story, at least as it applies to Aristotle. It seems to be a cautionary tale of sorts. The first reference to Aristotle as the one being ridden does not come until the begining of the 13th century, well over 1000 years after the event is alleged to have occured.

Moreover, the story of a man being ridden like a horse with a woman upon his back is an old story and is found in early Indian, Buddhist, and Arabic literature all of which predate the version with Aristotle. Indeed, the Aristotlian incarnation only made its debut much later as the popular Medieval tale "Lai d'Aristote" by Henri d'Andeli, a thirteenth century Norman poet.

In the Indian Panchatantra fables there is a section, "King Joy and Secretary Splendor" which gives a very similar description:

"Now Joy's wife became angry in just the same way, and would not be appeased though he begged her pardon. Then he said: "Beloved, I cannot live a moment without you. I will fall at your feet and beg your pardon." She said: "If you hold a bit in your mouth and let me climb on your back and drive you, and if, when driven, you neigh like a horse, then I will relent." And this was done."

The 1634 play "The Late Lancashire Witches" (Brome, Richard and Thomas Heywood. 1634) also involved a ponyplay-esque scene in which one of the characters bridles one of her grooms and rides him in place of a horse:

Mrs Generous:...and must I then be controlled by him, and now by you? You are a saucy groom!
Robert: You may say your pleasure. (He turns from her)
Mrs Generous: No, sir, I’ll do my pleasure. (She bridles him)
Robert: Aw!
Mrs Generous: ‘Horse, horse, see thou be, And where I point thee carry me.’
Exeunt, [he] neighing"

You will note that these accounts involve a female riding a male during a time in which society was very male-dominated. Along with the context in which the tales were retold, it seems likely these were satires reversing the roles of male and female to make a philosophical commentary more entertaining.

More accounts on ponyplay (along with references) in fiction. I quote the relevant section, but due to the relatively large number of them, I don't have much commentary. They're pretty entertaining though:

Human slaves have been used as beasts of burden throughout much of recorded history. Beyond being sold as property and used for manual labor, slaves in colonial America were sometimes given "...names reserved for dogs and horses. Masters sometimes bought neck collars for their slaves much as they did for their pets. They bridled, haltered...and castrated their delinquent slaves as if they were domesticated livestock. The punishment for running away on the plantation of William Byrd II was the 'bit'..."[4] (Morgan 1998, p.271).

The use of human ponies in British colonies during the 18th and 19th centuries have been reported. For example, following the British attach and subsequent colonization of Hyderabad (now in modern Pakistan) in 1843, the British Viceroy, General Sir Charles James Napier, took captured royal family members (and male princes) and used them "as horses for his personal carriages" (by using hunters).

In more recent times (1981) in Iran, some minorities were declared "to be 'sub-human', and bridled like donkeys, were led through the streets, chained in stables and fed on grass" (this is from a secondary web based source, so I cannot verify the veracity of this statement; once I find the original reference, I will add it and remove this note). 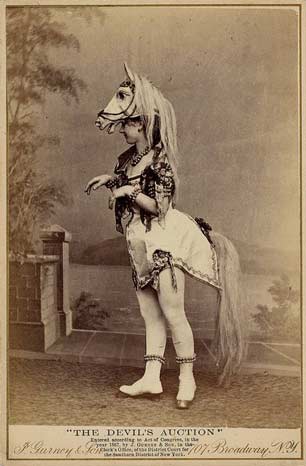 More contemporary (mid to late 19th century) occurances of ponyplay, or at least of suggestive equine role-play, can be seen in Burlesque and exotic dance. One notable example comes from the 1867 Broadway production "The Devil's Auction" where Eliza Blasina wears a pony costume complete with horse head and tail (the photo on the right is from the Charles H. McCaghy Collection of Exotic Dance from Burlesque to Clubs, alternate link to the scanned playbill).

As my research into ponyplay finally took me into the era of photography, I found a few (seemingly) dated photographs depicting ponyplay or petplay in various forms. It's hard to know the context of the photographs as in many cases no details are given for old photos.

"A famous polo player once told me that the way to teach a man to ride a polo pony was to bridle him like a horse with a piece of twine and drive him around the field. The man could stand even more pulling and jerking than the pony. In a short time he would have gained an appreciation of the sensitiveness of a horse's mouth." (Country life, Volume 37, 1920, p.51)

As I was scanning the primary literature for references to ponyplay, I came across this article[5] in the Journal of Forensic and Legal Medicine. As I read through it, this selection caught my attention:

"...on the role of a real or imaginary animal in character, including appropriate mannerisms and behavior. Thus it is a kind of sexual role-play.

The principal theme of human-animal role-play is usually the voluntary or involuntary reduction (or transformation) of a human being to animal status, and focus on the altered mind-space created. The most common examples of “conversion” are canids (pup, dog, wolf), felines (cat, kitten, lion) and equines (pony, horse)."

If any of you have read the wikipedia article on animal roleplay, you will recognize this text since it is verbatim from the first and second paragraphs.

What is interesting to me is that the journal article was received for publication on 22 January 2010, but identical text can be found in the wikipedia article all the way back to 10 November 2005 (the earliest date for which previous versions are available from wikipedia).

The authors of the journal article do not reference anyone in regards to this text (neither does wikipedia, but I hold the authors of peer-reviewed articles to a higher standard). While it is possible these authors were the same people who wrote this part of the wikipedia article on animal roleplay, my research does not bear out this hypothesis. Moreover, why use identical text, not paraphrased, but verbatim?

Why do I care? Becuase primary literature should be well researched and well referenced, and if the text was copied from wikipedia, it shows a carelessness and disinterest for the subject matter that undermines the principles of academia.

[1]: Longman, Hurst, Rees, Orme and Brown, "A complete collection of state trials and proceedings for high treason and other crimes and misdemeanors from the earliest period to the year 1783, with notes and other illustrations, Volume 3", 1816, p.1168. Print.