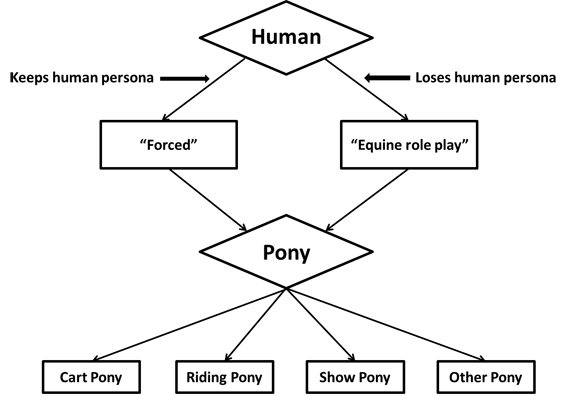 I would classify ponyplay into two very general types:

I don't include therians here since they truly consider themselves to be part animal (e.g. have an animal spirit). Thus, by definition it is not role-play to them. This differs from a human who enjoys non-sexualized realistic animal role play (the equine role players). Anyway, I don't want to get bogged down in details and semantics here - suffice it to say that you can think of human ponies falling into two fundamental types: those who keep their human persona, and those who lose their human persona.

Regardless of the general type ("forced" or "equine role play"), ponies will often fall into one of three main categories:

Cart Ponies are trained to pull carts for their Mistresses. They can pull carts on either two or four legs.

Riding Ponies are trained to be ridden. Again, they can be either two or four legged ponies, and they can be ridden bare back or with a saddle.

Show Ponies are carefully trained in proper form and carriage of the body at the various gaits, or they may be used to model fancy tack and equipment.

However, many ponies will fall into multiple categories (i.e. a show pony might also be a riding pony). Again, a cart pony, for example, can be either an "equine role play" cart pony or a human "forced" to be a cart pony (i.e. a human treated like an equine and forced to pull a cart like a horse). While the end result in both cases will be a human pony pulling a cart, the pony will likely have very different experiences depending on which type of pony he is.

Also contributing to the experience of the pony is his tack or equipment. Unfortunately, ponyplay tack and equipment, just like bio-equine tack and supplies, can be very pricey. Moreover, in the last 10 years I have seen an exponential growth in the marketing of equipment geared toward ponyplay. In a sense this is good since it (theoretically) offers you a greater selection, but in reality it can be confusing if you are new to ponyplay.

While you technically do not need any equipment for ponyplay, I personally need to be wearing some tack to really enjoy a scene. Of course, for many scenes in ponyplay I have to be "forced" to remain in pony role, which obviously will require some tack for restraint and/or control. Clearly, my needs will differ from a person who becomes a pony in a different manner. However, if you (or your pony) is like me, I would suggest starting out with a bit gag and pair of standard leather wrist cuffs. Some of you may already own one or both of these, but if not, they are really not that expensive.

Even among those who are not new to ponyplay, equipment ownership and usage varies widely. This underscores how important it is for you to determine what you get, or want to get, out of ponyplay before purchasing expensive equipment. On the other hand, I like all of my gear and love getting new gear. If I could afford to purchase pony gear all the time, I would. So, if you can afford to buy a bunch of equipment and want to do it, then I say what hell, go for it.

Ponyplay is alleged to have been around for millennia (if you're interested, you can learn more about the history and mythology of ponyplay). However, this date is arrived to by erroneously intepreting a cautionary early 13th century story about Aristotle (the Greek philosopher) as historical fact. Nevertheless, this misunderstanding was, at one time, widespread enough such that ponyplay was sometimes referred to as the "Aristotelian Perversion." However, there are multiple historic references to ponyplay throughout the 16th, 17th, and 19th centuries (though I use the term ponyplay loosely here since many such references to "ponyplay" are not as consensual roleplay). Thus, it would seem we are not alone: ponyplay has held appeal for many other over the past 2000 years.

I have to say, I have been entranced by ponyplay for many years and have been lucky enough to participate in ponyplay on numerous occasions over that time. But...if you asked me what exactly about it appeals to me, and why I prefer to be a pony over a puppy, or even any other equid (although zebragirls can be really hot), I would not have an answer for you. Of course, humans have been fascinated by horses for many thousands of years, even before they were domesticated, so perhaps this plays some fundamental role in the psyche?

Anyway, the point is: while there are as many reasons to find ponyplay appealing as there are people who find it appealing, you don't have to know why you enjoy it to enjoy it!