Castration Play (Gelding) with an Elastrator

This is an extension on my article on mock castration in ponyplay. Here I will discuss the specific procedure for gelding a ponyboy using an Elastrator and elastic bands. As I mentioned in my main article on castration play, this is play, not a tutorial on how to perform actual medical or veterinary procedures.

The image on the right shows an elastrator and elastic bands used by the device. You can see in this photo that the elastrator has an elastic band stretched open in a square shape.

An elastrator is probably the easiest device to use for castration. It works by applying a very tight elastic band on the scrotum just above the testicles. This is reported to be very painful until the testicles die from lack of blood supply, which can take anywhere between 1 and 12 hours.

Note: I've had one of these applied to me on more than one occasion, and I can vouch for the pain involved here. If you hang a weight or two from the balls below the band, the pain is beyond description.

Prior to beginning the gelding procedure itself, make sure your ponyboy is well restrained and you have chosen a clean area of in which to work. I highly recommend using a spreader bar to prevent him from closing his legs. Obviously, a ponyboy will not be keen on being gelded. Moreover, the pain of the procedure may also induce him to try closing his legs. 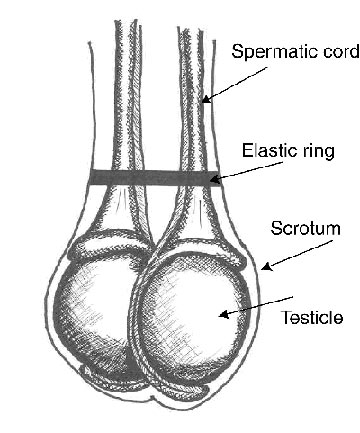 With the elastic band stretched open, slip it up and above the pony's balls. You will want to release the band when it is just above the testicles (see the diagram on the left).

If you make a mistake you can cut it (the elastic band, not the pony's balls) and try again.

If you placed the band correctly, then you are done. I recommend leaving the pony restrained until you are ready to remove the band (or his balls have shriveled up and died) since he will very likely try to remove the band. However, if the pony is in hooves and/or his hands are restrained, he will not be successful in removing the band, so you can let him loose (or keep him attached via a long rein) and see what he does. Odds are he will be in crippling pain until the band is removed (and for some time after as well).

Aside from the pain, one of the best parts of castration play with an elastrator is, if you have his hands restrained (in hoof gloves/fist mitts), watching him run around and try to get the band off his balls. Restrained in such a manner, he will not be successful in removing the band, and will likely make the pain far worse with his efforts. You can just sit back and watch the fun.

If simple castration play with an elastrator doesn't yield enough pain for your liking, you can easily add more. To do this, gradually add weights to either the elastrator, or to the ponyboy's balls (below the band). The latter method is actually more painful since your pony will have heightened sensation (to put it mildly) in his balls at this point. There are other options for intensifying elastrator play, which involve incorporating weights, but also scrotal infusion, and even an electric shock collar to the pony's balls.

This procedure not only messes with your ponyboy's head, but is intensely painful. Just be sure not to cause any permanent damage.